The conjunction is the part of speech used as a “joiner” for words, phrases, or clauses in a particular sentence. It links these words or groups of words together, in such a way that certain relationships among these different parts of the sentence will be established, and the thoughts that all of these convey will be connected.

What are the Different Types of Conjunctions?

Among the three types of conjunctions, this is probably the most common one. The main function of coordinating conjunctions is to join words, phrases, and clauses together, which are usually grammatically equal. Aside from that, this type of conjunctions is placed in between the words or groups of words that it links together, and not at the beginning or at the end.

In the sample sentence above, the underlined word serves as a coordinating conjunction that links two words together (pizza + burgers).

In this sentence, you’ll see how the same coordinating conjunction ”and” from the first sample sentence can be used to link clauses together (“what those girls say” and “what they actually do”), instead of just single words.

How to Punctuate Coordinating Conjunctions

For you to easily recall the different coordinating conjunctions that you can use, you can just remember the word “FANBOYS,” which stands for: 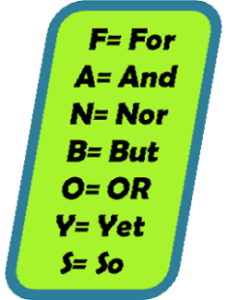 The correlative conjunctions are simply pairs of conjunctions which are used to join equal sentence elements together.

What is a Conjunctive Adverb?

Conjunctions are very essential in speech and in writing. They improve the cohesion between the different parts of the text and enable you to construct long sentences without sounding awkward. Although the concept of conjunctions may seem too simple, you should still take time and make sure that you place the punctuations properly, choose the appropriate conjunctions, and see to it that you adhere to the standard rules of grammar.